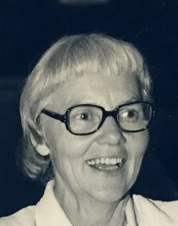 Professor Betty Maillette, founder of the jujitsu school where I started my studies long ago, died on Monday, August 22, 2016. She was 92. You can read a bit about her life here, in her obituary, and here, at the American Judo &amp; Jujitsu Federation web site.

I did not know Prof. Maillette well; she retired from jujitsu and turned her school over to one of her own students in 1980, two years before I started to practice. (I'm pretty sure that the 1982 date on the AJJF web site is incorrect.) I'm very sorry not to have seen her jujitsu when she was in her prime; her students say it was extraordinary.

She occasionally visited the school for a few years after her retirement, and even taught class a couple of times. She taught a class that I participated in at the American Judo &amp; Jujitsu Federation's (AJJF)1986 convention. In 1997, she came to Oakland for an event honoring the 25th anniversary of the opening of The Dojo in 1972.

I always thought that it should have been a 35th anniversary party, honoring the anniversary of when Prof. Maillette started teaching at the downtown Oakland YMCA. She had been studying with Professor Ray Law, one of the founders of the AJJF, at his school on Grand Avenue* for several years and had received her shodan (first degree black belt) from him. He got a call from the Y asking about women's self-defense classes, and he sent his student, the future Prof. Maillette, to teach them. In one of those thoughts that occurs to you too late, I wonder whether anyone asked her how she developed that first class. How did she decide what to teach? She may well have spoken to Prof. Law about the class - what did he have to say? Lost history, alas.**

At some point during her time at the Y, Prof. Maillette must have added jujitsu classes; I believe I have seen some photos taken there of jujitsu practice. She also developed a long and intricate self-defense curriculum, which covered just about every aspect of defending yourself against a physical attack, from using your voice to blocking, kicking, and striking, to escapes from common attacks to defending yourself on the ground. The Special Self-Defense Course included some techniques taken from the jujitsu Yawara board, some basic throws, a lot about the principles of jujitsu, and could take a year or more to complete.

In 1972, she opened a dojo at 3718 MacArthur Blvd., in the Laurel District. This school was called The Dojo and taught jujitsu and self-defense to women only. For many years, her own silkscreen business was next door, and I'm pretty sure that I still have a bandana she printed in her shop. During the 1970s and early 1980s, a number of her students became black belts, with two advancing to second-degree black belt. In 1980, having reached the rank of Rokudan (sixth-degree black belt), she turned the school over to one of her black belts, Mady Shumofsky, my first sensei.***

As I said, i didn't know Prof. Maillette well; she was largely retired from jujitsu by the time I started, and she moved to Fort Bragg before I got my black belt. Despite this, Prof. Maillette had an enormous influence on me and my life. I started out during the summer of 1981 in a six-week self-defense class that she designed and taught for many years; as I advanced in jujitsu, I learned to teach that class, and I teach it to this day. I started jujitsu for real in 1982, and completed her special self-defense class, and eventually earned my shodan and nidan in Dan Zan Ryu jujitsu. Much of what I teach my students today is what she taught, inherited, as one inherits in the martial arts, from my senseis and from her. Jujitsu is also very much the lens through which I see the world.

Betty Maillette was prescient: she taught self-defense to women to strengthen and empower them, before the second wave of feminism, and she taught jujitsu to women at a time when many martial organizations didn't welcome women as members or students. She taught hundreds, if not thousands, of women. Several dojos were operated or founded by women in her jujitsu lineage, and we all carry on her teaching.


* For many years, the building housed the Country Furniture Store. for ten years, it was Camino Restaurant, which closed at the end of 2018.
​** I now have many of Prof. Maillette's papers, given to me by her family, and there may be some answers there.
​*** I had five senseis by the time I got to shodan, all without changing dojos, although the name and management did change. It's a long story.